As opposed to the multi-purpose windows’ userland shellcode, kernel ones merely try to elevate privileges and obtain an NT\SYSTEM status. There are several ways to accomplish this, and we are going to explore some of the different scenarios.

Most of the following ideas have been inspired by Morten Schenk and Cesar Cerrudo excellent works, which I have then gathered and readapted to the latest Win10 version.

Before jumping too quickly into shellcoding, we want would like to setup a comfortable and easy-to-fire shellcode loader on our system.

Setting up the test environment.

For a scalable and portable lab, we are going to need to VMs, both win10 19H1 (1903), running on the hypervisor of your choice. The target vm will be the one where we are going to load and run the shellcode, while the debugger vm is the one running WinDBG remotely.

Instead of relying on a vulnerable kernel-side software, we are going to use a custom driver, provided by FireEye.

The driver’s set-up process can be summarised through the following points.

1.Download the driver source code here.
2.Download and install WDK 7.1.0 here.
3.Compile the driver with the “x64 Checked Build Environment” by running ‘ez.cmd’ via the WDK command prompt.
4.Once we have baked “kscldr.exe”, we can transfer it to the target VM, where we are going to run our kernel-side shellcode.
5.We can now load any raw shellcode with the following command kscldr.exe <raw_shellcode.bin>

There are a lot of tutorials about setting up two WinDBG VMs talking to each other, most of them involving named pipes, which is good but quite limiting in terms of performance.
I have instead opted for network debugging and here is my setup:

We are going to configure the necessary debugging environment in a privileged shell:

We have to run WinDBGx64 as admin and configure network mode kernel debugging on the same port we have defined previously on the target (50000 in this case) with a key of “1.1.1.1” (you are advised to use a stronger key in a shared environments :))

Then run in a privileged shell.

Since its very first NT version, Windows has been known to change kernel data structures and, because of this, all the following kernels shellcodes are going to reference data through structures offsets.

I have so decided to port all the shellcodes to the latest windows version (19H1 as per 06/2019), and even though has not been updated since 2016, would be nice to dynamically query via APIs Project Terminus, to quickly generate the right offset into NASM. Nevertheless, a quick diff on NTDiff will always do the trick.

The first technique we are going to cover it’s called ‘Token Stealing’, which simply involves replacing the process of the exploited (or simulated) app, with the uber-privileged one from the System process.

On the exploited process, we have to locate the EPROCESS structure, which is the kernel representation of a process object. As for many other windows structures, the EPROCESS is located at a fixed offset from other elements, which are eventually dependant on constant. In our case, the constant is the GS register, at which offset 0x188 we can find the KTHREAD of the process itself. So we can save it in the R9 register, for later usage.

Which translates to the following assembly line of code.

Since we want to elavate the privileges of the parent process we need to find the ProcessID of cmd.exe.
We also notice that this offset differs from previous Win10 versions,

Great, now we have saved the PID of cmd.exe but, before doing anything else, we need to find its EPROCESS address in memory.
If we inspect the current process (kscldr.exe), we can see at offsets 0x2e8 and 0x2f0 that we have ProcessID and ActiveProcessLinks structures.
The latter value is a linked list of EPROCESS objects that can be parsed and where each PID be compared against the one that belongs to cmd.exe, saved in the r8 register.

Once we have found the EPROCESS data structure of cmd.exe we can inspect it and locate at offset 0x360 the Token object.
All set, all good, we can now save it…

…into the rcx register.

Now, it only remains to find the Process ID and Token of System from which we want to grab its power.
We are going to browse in the same linked list as before, until we find a process ID of 4, which is a constant ID for System.

And the very last crumble…to override the existing cmd’s token (saved in rcx) with System’s one (stored in rdx).

The second method that we are going to investigate is based on ACL editing. The original paper from Cesar Cerrudo from 2012 shows how we can find the SecurityDescriptor of a privileged process and override it with NULL. If a process has not SecurityDescriptor, the kernel assumes that has been created with a NULL DACL which means that everyone (every other process) can access it. However, Microsoft has introduced a patch on Windows10 1607 Redstone 1, where it now maps a table of pointers to object structures, and if a pointer to the SecurityDescriptor is set to NULL, it will trigger a Blue Screen Of Death (BSOD).
Interesting enough, this mitigation only works if one has a ‘write-zero-where’ primitive, but is not sufficient with a ‘read-write’ vulnerability.
As Morten Schenk explained here, instead of NULLifying the pointer to the SecuirtyDescriptor, we could modify the content of the ACL itself. Our next goal here is to zero-out winlogon.exe ACE entry, so that we could perform process injection at a later stage.

Here is our plan of action: 1. Locate the SecurityDescriptor pointer inside ‘winlogon.exe’ 2. Here we should find the SECURITY_DESCRIPTOR object that includes a DACL with ACCESS_ALLOWED_ACEs. 3. Change the ACE’s SID to S-1-5-11 (standard SID for ‘logged in users’) 4. Override the ‘Mandatory Integrity Policy’ of the exploited process from the current valu to ‘0’, so that we can access the handle of winlogon.

So, we have to find the Process handle of winlogn first.

Get the pointer to the SecurityDescriptor

And dump its content by zoroeing out the last 4 bits.

It shows two ACEs, one for the SYSTEM group and one for the Administrators group. Let’s dump the ACE structure, which should be 0x20 ahead from the SecurityDescriptor :

No ACE symbols are provided by MS, so we have to dump it as hex:

As said, our goal is to modify the current SYSTEM SID (S-1-5-18) to THIS ORGANIZATION (S-1-5-15), which will allow any logged in user part of the organization domain to access the process.

The last step is to inhibit the IntegrityLevel block, by modifying the current process MandatoryPolicy to zero.

Our shellcode loader is running with high integrity level and the Mandatory Policy is set to 1, which mean we cannot mess around with anything above our level, such as system processes.

Let’s change the MandatoryPolicy of the shellcode loader to zero, so that we are allowed to perform process injection into winlogon.exe.

And verify it is indeed changed.

At this point we are ready to perform our code injection into winlogon.exe and spawn a new cmd.exe with system privileges.
In order to simulate a vulnerable system, I have used Morten’s process injector PoC , comment out all the primitives and leaks, leaving just the ‘injectCode()’ function and compile it.

Once done the above, we can copy it into the same kscldr.exe folder.
I have also modified the driver user code (kscldr_u.c) to launch shellcode.exe via SYSTEM() after it has installed the driver as a service:

Now we are ready to run the driver loader by passing the ‘ace’ shellcode as an argument, and if the stars align, we should get a nice SYSTEM shell. 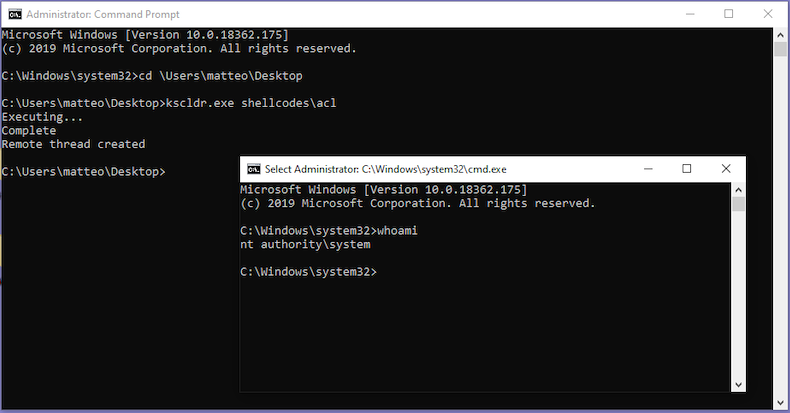 The last shellcode we are about to test is once again based on the Token object structure, which has a substructure called SEP_TOKEN_PRIVILEGES at offset 0x40.

And in the specific case of cmd.exe we have:

The amount of enabled privs is obviously less then the present ones, so we could replicate the same value (1e73deff20) into the ‘Present’ field as well.
Hence, our goal is to modify the values contained at offset 0x48, so that we can enable all of the available options and spawn a SYSTEM shell. We are going to reuse most of the code present in the first token shellcode, as we need to access most of the same data.

After getting a pointer to cmd.exe’s PID, we need to gets its EPROCESS…

…we need to save the token pointer and, at offset 0x48, override the available privs.

After running it, we can verify that we went full throttle, and since the current shell has mighy powers, it can now spawn SYSTEM via the same process injection technique we ran previously.