Have you ever wondered how is possible to bypass Antivirus detection logics by making your PE undetectable?
Well, let’s give it a try! Even though similar concepts can be applied to any nIX operating systems, this tutorial is going to deal with Windows-only, as it’s still the most widely adopted OS today.

Generally, most antivirus software operates by detecting a well-known signature inside a binary. That signature is the result of the analysis performed by the malware researchers: after finding a series of malicious set of instructions, those instructions are then hashed, and the resulting unique hash is included in the next AV update.

Now, there are quite a few techniques that enable antivirus camouflage and most of them employ binary’s code caves. A code cave is nothing more then a sequence of unused null-bytes inside the original executable that we are going to take advantage of by injecting our own code. We are going to need two code caves: a quite small one, that we call CC1, which will contain the XOR stub, and a bigger one, CC2, that will fit the final shellcode, like a bind or reverse shell. Here is the high-level execution flow:

Here is the modified execution flow: 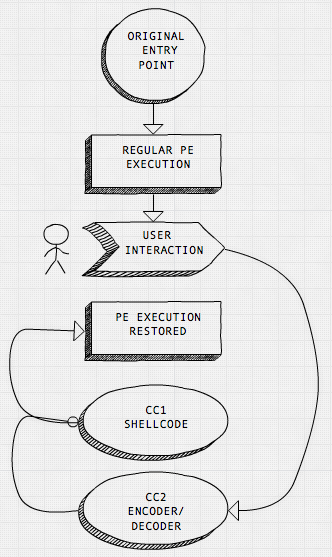 To demonstrate this process, I decided to target one of the most popular software for net/sys admins: Putty.

We now seek the space required by the bigger candy, CC2, as will be easier to find a smaller cave for CC1. Let’s estimate the shellcode payload size (we go big, and aim for a full-fledged reverse shell.)

We were lucky and won two 343-byte-long caves residing in the DATA section. This should provide room for the msfvenom payload, so we take note of the virtual address of the first cave at 0x00445CDE. Since we’ll need to write in the DATA section, we open the exe with LordPE and flag it as writable. The code cave appears to be large enough to fit both the fatty shellcode and the skinny XOR stub.

In order to be fully undercover, we have to pick a user-interactive instruction and not the default entry point. An easy way to do so is to dump all the ‘referenced strings’ with Immunity Debugger and pick up our favorite one. I have opted for the ‘Release’ string, which is embedded in a popup activated by the ‘About’ button.
Here is the original code:

We’ll be replacing the first instruction with a ‘JMP to [XOR STUB]’ and add it back at the end of the shellcode.

As an encoder/decoder stub we could have used any stronger encryption algorithm like RC5 or AES. However, for the sake of simplicity we have decided to stick with basics, i.e., XOR, as it has a nice symmetric property. Once we XOR (encrypt) the content of a memory address with a key value, like 0x0E, we can then obtain its original value (decrypt) by reverse XORing it. Here is the XOR stub code:


Paste in the shellcode

Let’s fire up Immunity Debugger and paste the shellcode inside the code cave we found earlier at 0x00445CDE. However, before rushing into that, we need to set the stage properly in order to restore the previous stack-frame once it has been altered by our shellcode.

Right before the shellcode, we add a couple of instructions, PUSHAD and PUSHFD.Then we execute those, and take note of ESP value right after the two instructions. Once the reverse shell has been executed we have to note again the value of ESP and then subtract it from the previous value. In my case:

Here are the full extra instructions: 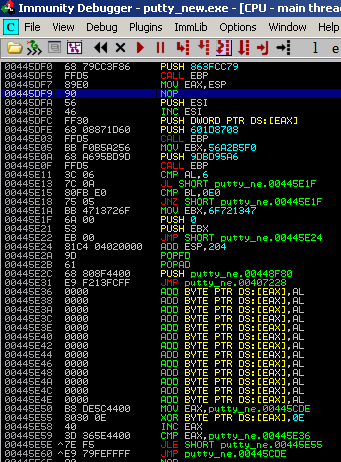 Note the NOP highlighted above which I have been added instead of the ‘DEC ESI’ instruction: this will prevent the shellcode from hanging while the WaitForSingleObject function is invoked.

We now want to create a new version of Putty, with an encoded and (hopefully) untraceable shellcode. Let’s try to achieve this by running the XOR stub until the last instruction, where we place a break point (JMP 00477857). We then execute the next instruction and jump into the encoded shellcode. 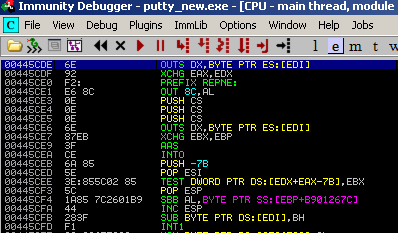 We then save it as a new file, which once loaded again will XOR decode/execute the reverse shell.

Great, now we have a fully working backdoored version of Putty and we want to be sure about Virus Total detection ratio.

But let’s keep this topic on hold until the next tutorial. Meanwhile…

On how to get valid certificates:
check this paper And how to automate the whole backdooring process with The Backdoor Factory:
get BDF

A word on ASLR-enabled binaries and PiC

This entire tutorial is based on the assumption that the test binary has been compiled without ASLR, so that we can use hardcoded addresses. But what about newer binaries which supports ASRL? A whole bunch of information can be found here.
However, we still need our XOR stub, to encrypt the binary on disk and decode it at runtime. I made this proof of concept XOR stub that support position independent code, which uses JMP/CALL/POP and registers to keep track of the encoding routine.

We still have to face the challenge of hijacking string references with short jumps or by other means that do not involve static addressing.